Award-Winning Author Father Patrick Desbois
With The Norfolk Forum and the Holocaust Commission of the United Jewish Federation
Thursday, January 31, 2019, 7:30 pm, at The Sandler Center

In January 2018, Father Patrick Desbois released his book The Holocaust by Bullets. He is being jointly sponsored as a speaker by the Virginia Beach Forum, the Norfolk Forum, and the Holocaust Commission of the United Jewish Federation. This event will be held at the Sander Center for the Performing Arts in Virginia Beach’s Town Center. In the Holocaust by Bullets, Father Patrick Desbois documented for the first time the murder of 1.5 million Jews in Ukraine during World War II, based on wartime documents, interviews with locals, and the application of modern forensic practices on long-hidden gravesites. Nearly a decade of further work by the organization he founded Yahad – In Unum (“together” in Latin and in Hebrew), drawing on interviews with 5,000 neighbors of the Jews has resulted in stunning new findings of the extent and nature of the genocide. The mass killings took place across the Eastern Front, in seven countries formerly part of the Soviet Union invaded by Nazi Germany. They followed a secret template, or repeatable script, that included a timetable and involved local inhabitants in the mechanics of death to ensure complicity, whether it was to cook for the killers, to clear, dig, and cover the graves, to witness their Jewish neighbors being marched off, or to take part in the slaughter. __Yahad President Father Desbois assembles a chilling account of how, concretely, these events took place in village after village, from the selection of the date to the twenty-four-hour period in which the mass murders unfolded. Today, such groups as ISIS put into practice the Nazis’ lessons on making genocide efficient.

In 1978, Father Desbois worked as a math teacher for the French government in Africa. He later worked for Mother Teresa in Calcutta, where he helped set up homes for the dying. After being ordained in 1986 at the age of 31, he became the Superior of the Grand Seminary in Prado, Lyon, in 1992. From 1992-99, he served as Secretary of Jewish Relations for Cardinals Decourtray, Jean Balland, and Cardinal Louis-Marie Billé. After he requested to work with the Jewish community of France, he was appointed the secretary to the French Conference of Bishops for Relations with the Jewish community from 1999 to 2016. Since 2016 he is a chargé de mission of the Cardinal of Paris. He serves as well as the advisor to the Vatican on relations with Judaism. In 2004, he joined leaders in the French Catholic and the Jewish community in founding Yahad-In Unum (“together” in Latin and in Hebrew.) The organization’s purpose is to further relations between Catholics and Jews. Its largest and most ambitious initiative is to locate the sites of mass graves of Jewish victims of the Nazi mobile killing units, the Einsatzgruppen, in the former Soviet republics and Eastern Bloc. His work has been sanctioned by the Pope, recognized and encouraged by the President of France and supported in Europe and the United States. Desbois has been internationally recognized for his extraordinary efforts; his awards include the Medal of Valor by the Simon Wiesenthal Center, the Roger E. Joseph Prize by Hebrew Union College, the Humanitarian Award by the U.S. Holocaust Memorial Museum, the Jan Karski Award by the American Jewish Committee, the B’nai B’rith International Award for Outstanding Contribution to Relations with the Jewish People and more recently, the National Jewish Book Award for his 2008 book Holocaust by Bullets (Palgrave-Macmillan). In 2013, he received the LBJ Moral Courage Award from the Holocaust Museum Houston. Between 2015 and 2016, he has been teaching at the Program for Jewish Civilization in the Edmund A. Walsh School of Foreign Service, Georgetown University as an adjunct professor. Since 2016 he is the inaugural holder of the Braman Endowed Professorship of the Practice of the Forensic Study of the Holocaust at the Center for Jewish Civilization. 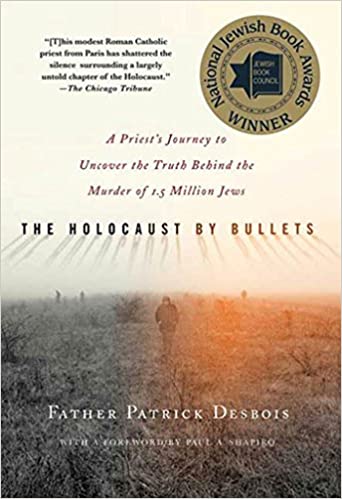